All About IBS Flare Ups: Prevention and Treatment


Do you ever get an IBS flare-up that completely stops you in your tracks?  Extremely annoying, right? Because there is nothing that you can do except stay at home in bed or run to the bathroom and stay there as long as you need to.

IBS can be either constant or come and go with periodic flare-ups.  Neither one is fun, but the flare-ups are completely unpredictable.

When people talk about an IBS flare-up they are usually talking about either pain and/or diarrhea (IBS-D). IBS can involve many other symptoms, including constipation (IBS-C), gas, and bloating, and those symptoms can also make up an IBS flare-up, but it more commonly refers to urgent loose bowel movements that often include cramping and pain. 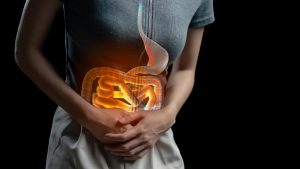 Most people describe an IBS flare-up as a loss of control of their bowel movements. You will likely have an incredibly urgent need to run to the bathroom. And you may feel like if you don’t make it there immediately, you’ll likely make a mess in your pants.

Not everyone gets abdominal pain with their IBS flare-up, but if you do it can be so debilitating that you end up curled up in the fetal position, lying down trying to deal with the pain. It may be all you can do to get through the day until it improves.

How Long Does An IBS Flare-Up Last?

IBS flare-ups can occur once a week, once a month, or once every several months. They may last anywhere from a few hours to a few weeks. They occur in between periods of relatively normal bowel movements and unremarkable digestive activity, or with whatever you’ve grown used to that isn’t an IBS flare.

If you pay close attention to your digestion and your bowel movements, many people notice that their digestion is not exactly perfect even in between their IBS flare-ups. Have you noticed this? (For more on how to know if you have good digestion, click here.)

What To Do When You Get An IBS Flare Up

Ideally, you see an IBS specialist and sort out the true cause of your IBS flare-up and prevent it from ever happening again. That is always the best option. However, there are a few things that you can do immediately to deal with the symptoms and to minimize the pain and urgency to get some semblance of your life back.

How To Treat An IBS Flare Up

Your first instinct when treating an IBS flare may be to not eat. That is a good idea!  There is nothing wrong with fasting for a day or two, and that is probably the best thing to do.  You want to minimize any impact on your digestive system so that it can heal, and you will accomplish this by not eating and therefore not asking it to do anything.

Stress, of course, doesn’t help either. If you tend to focus your stress on your stomach or abdominal area, then you want to do everything you can to mitigate that. This is always easier said than done, but even something as simple as taking some deep breaths has been shown to help decrease the stress response.

So right now, stop and take 5 long slow deep breaths through your nose. Count to 5 on the way in, and 5 on the way out. And let your shoulders drop when you exhale.

Simple, right?  And effective. Use it for any kind of stressful situation. You can do it anywhere at almost any time – at your desk, in your car, in a meeting, you name it. Don’t forget to breathe.

What To Eat When You Have An IBS Flare Up 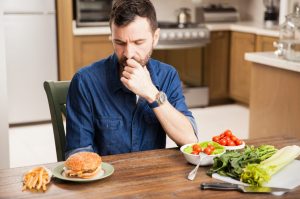 You probably don’t feel like eating much, if anything, when you have an IBS flare-up. However, sooner or later you are going to want to eat something.  When you do, here’s what to eat.

A low fodmap diet is often suggested, but here’s a more detailed explanation of exactly what to do.

Food such as salads, uncooked veggies, raw foods, nuts, etc. requires a lot of energy to digest. When you are in the midst of an IBS flare-up, your digestive tract is very inflamed and irritated. The last thing it wants to do is to have to work hard to break down hard-to-digest foods.

Stay away from salads, nuts, unpeeled fruit, raw foods, and fatty foods.  Make sure that everything you eat is cooked and extremely easy to swallow, and that you don’t need to do much chewing. Don’t be afraid to overcook things at this stage. It’s better than undercooking them.

Soups are another good option for the same reason. They are easy to digest because the process of making soup has already broken down much of the food in the soup. This minimizes the impact on your digestive tract.

Of course, be sure to avoid any foods that you already know are problematic. If you have a food intolerance or sensitivity but you like to partake in that food occasionally because you feel that you can get away with it, now is not the time to test your digestive system. Be sure to avoid those foods.

What To Take For An IBS Flare Up

We have found that one of our most popular products for IBS flare-ups is GI Support. Patients often find that helpful because it is generally soothing to the digestive tract and can help to speed up the healing process. It’s not a cure-all because nothing is, short of getting the right kind of testing and seeing an IBS Specialist who knows what to do with it, but it’s better than nothing.

Probiotics may also help. This is often the case, but sometimes they do the opposite and can make things worse.  If you are one of those people who finds that probiotics make your symptoms worse, or don’t help much, then you need to see someone who understands why that is happening.

« IBS in Children: Treatment, Cause, Signs and Symptoms
Crohn’s Disease vs IBS »