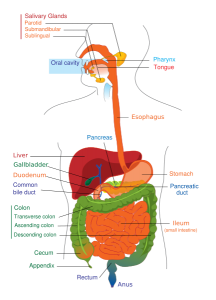 Diverticulitis, although not IBS, is closely related to IBS.

The real difference is that in diverticulosis doctors can see the damage, thus giving you the impression that they know why you are suffering. Nothing could be further from the truth. In reality people suffering from diverticulitis are no better off than those diagnosed with IBS (irritable bowel syndrome) when it comes to providing you with a solution to your problem. And both conditions are treated in the same manner.

Diverticulitis is the diagnosis given to people who develop inflammation as a result of diverticulosis. Diverticulosis is presence of weak pouches in the colon called diverticula.

Diverticulosis is generally diagnosed from a colonoscopy or a barium contrast x-ray.

Diverticulosis is generally thought to be caused by excessive pressure in the colon, which may be combined with a weakening of the colon due to age, inflammatory damage, or both. This pressure is likely directly associated with constipation, although many people don’t recognize themselves as having constipation.

What many people have come to think of as normal bowel habits may be far from healthy or normal.

Diverticulitis, the inflammatory condition associated with diverticulosis, is thought to be caused by foods getting caught in the pouches resulting in the development of an infection.

However, this has never been proven.

The real issue remains: Why was there so much damage and inflammation in the first place? The answer is usually far more complicated than a simple lack of fiber or water. The same issues that cause inflammation and digestive symptoms in IBS also cause problems in diverticulosis. The two primary areas of concern that need to be addressed are food allergies and imbalances in the ecosystem of the digestive tract. These are complex issues and are almost never addressed properly.

Successfully treating diverticulitis remains a key component of what we do at the IBS Treatment Center and is identical to our approach to IBS. To learn more about our approach, including a wealth of information about food allergies as well as using DNA technology to assess the microbial environment of the digestive tract, please contact us at Info@IBSTreatmentCenter.com or by phone at 1.888.546.6283.