IBS and Your Gallbladder

Patients with irritable bowel syndrome (IBS) and other digestive problems such as constipation, diarrhea, or abdominal pain often wonder if they have a problem with their gallbladder. 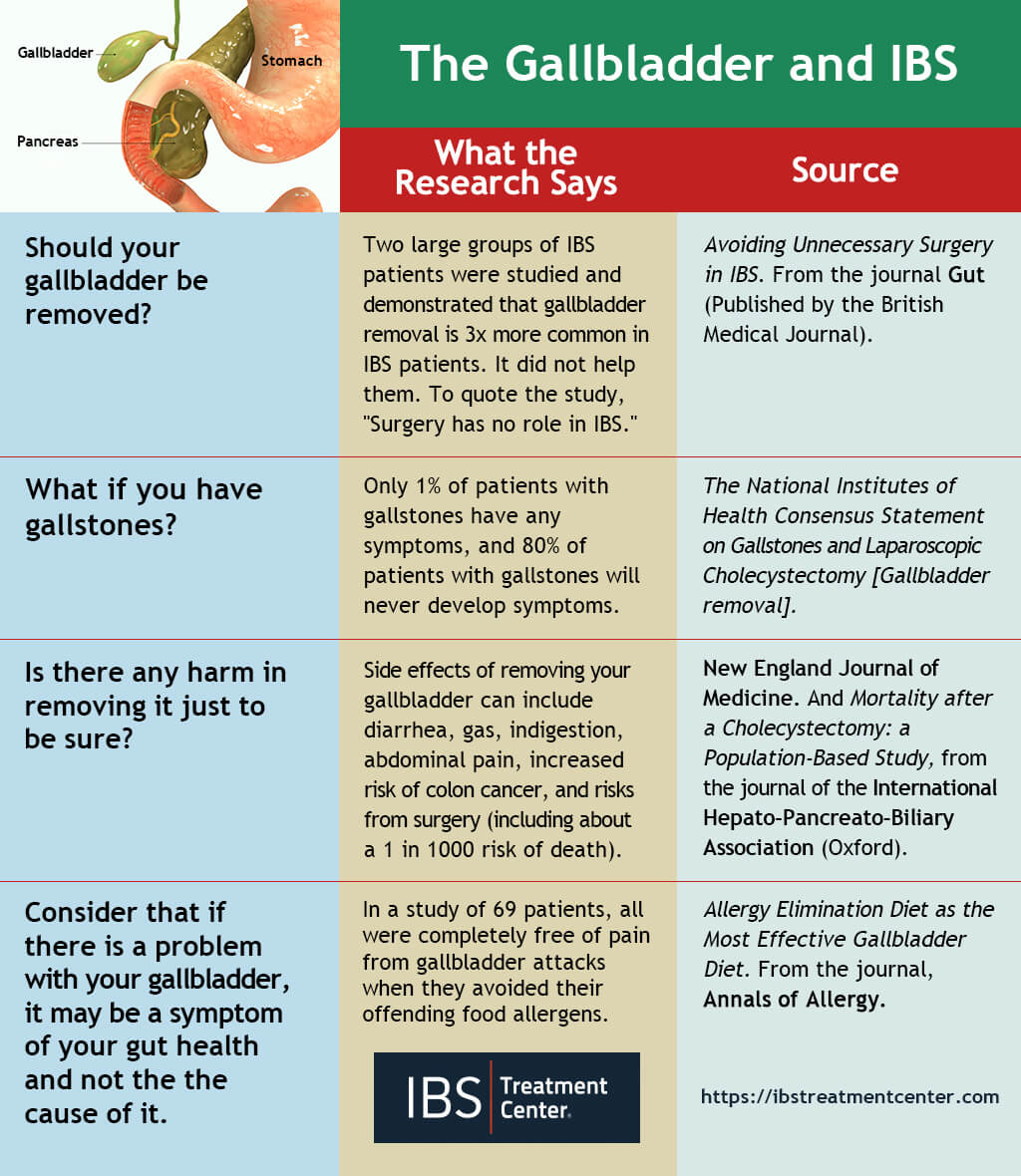 Why You Need Your Gallbladder
The gallbladder is a pear-shaped organ that sits just below the liver on the upper right side of the abdomen. It does exactly what its name describes; it is a small bladder that collects and stores gall, more commonly known as bile.

Bile is a highly concentrated yellow-green fluid that contains bile acids, which are important for digesting fats. When you eat, your gallbladder contracts and secretes bile into the small intestine to help you digest your food.

Bile is produced by the liver and piped over to the gallbladder via the bile duct.

When Should You Have Your Gallbladder Removed?

In some people, stones develop inside of the gallbladder. These stones, when small, can become lodged in the bile duct, which can cause severe pain. They can also be very dangerous if they clog the pancreatic duct.

Larger stones are not able to pass into the bile duct, but their presence can cause severe pain. Sometimes the pain is worse when the gallbladder is contracting. In either case, removing the gallbladder usually relieves the pain and you feel much better.

What is Gallbladder Surgery Like?
Gall bladder removal surgery is called a cholecystectomy. Doctors usually insert a tiny video camera and surgical tools through four small incisions to remove the gallbladder. Sometimes, it is necessary to use a larger incision.

Often, patients go home the same day as a cholecystectomy. In cases of an open procedure using a larger incision, the hospital stay is longer. Either way, gallbladder removal is a relatively common surgery and considered almost routine in the surgery world.

What Happens to Your Digestion if Your Gallbladder is Removed?
If your gallbladder has been removed, then it will be more difficult for you to digest fats. In such cases, eating fat may cause loose stools.  Bile is very important for digesting fats. Without it, people are unable to digest meals high in fat content (such as meats, nuts, dairy, and other rich foods) and often suffer from diarrhea.  They also can suffer from the poor digestion and absorption of fat soluble vitamins, which include vitamin A, vitamin D, and vitamin E.

Large studies have shown that patients with IBS symptoms and/or abdominal pain are susceptible to having unnecessary gall bladder removal surgery when they do not have gallstones. In fact, in the past some 80% of gallbladder surgeries in IBS patients has been unwarranted. This exposes the patient to the increased risks of surgery and to further digestive problems caused by the absence of a gallbladder.

Once the procedure has been performed, justification is always given for its removal. No doctor ever says, “Well, I guess we should have left it in.”  Patients often are informed that sludge or sand was found in the gallbladder, giving the impression that its removal was necessary.  However, those generally do not cause symptoms and often go away on their own. Another interesting post- surgical diagnosis is that there was scarring found in the gallbladder. This is a sign the the gallbladder is being damaged, which leads us to…

There are many inflammatory triggers that can damage the gut. Treating those conditions can enable patients to avoid unnecessary surgery and achieve good digestive health.

Jennifer came to the IBS Treatment Center complaining of abdominal pain, gas, bloating, and alternating constipation and diarrhea. She had been having digestive problems most of her adult life, but they had become more severe during the past few months.

Jennifer was not confident that undergoing surgery was a good idea or that removing her gallbladder would solve her problem, so she decided to visit the IBS Treatment Center.

Jennifer explained to her new doctors that she could not understand why removing her gallbladder would help her IBS, since zero percent function would be less than 50 percent function.

In the past, Jennifer had found that by changing her diet she could improve her digestive symptoms to some extent, but she suspected that there were triggers she couldn’t identify without help.

The IBS Treatment Center properly tested her for food allergies and found she was reacting to egg, vanilla, psyllium, cayenne pepper, banana, grape, and nutmeg. Jennifer also had a bacterial overgrowth and a deficiency of good bacteria.

Within days of avoiding her food allergens and beginning treatment for her bacterial imbalance, Jennifer began to notice improvement. By her two-month follow-up appointment, her digestive symptoms were consistently 95 percent improved and she no longer had any concerns about digestive problems, much less gallbladder issues. She was also sleeping better and had more energy.

After six months, Jennifer says she continues to feel great and is very happy she did not have her gallbladder removed.

Our goal at the IBS Treatment Center is to end IBS symptoms for the long term. To do this, we work to find the true cause of a patient’s problem, not just treat the symptoms. Once we find the underlying cause of the IBS or gut related issues, we can treat it and the symptoms will end.

« Stomach Acid: Why You Need It
What Causes Constipation? »