IBS in Men Signs and Symptoms

There are some key differences between IBS in men and women, and it’s important to acknowledge and address those differences.

How Many Men Are Affected by IBS?

IBS is often considered to be a primarily female problem, but the data tells a different story. Roughly 10% of the population in the United States is affected by IBS, and of that number, only slightly less than half are men, according to the American College of Gastroenterology. That puts us at well over 15 million men who are suffering from IBS. That’s a big number!

Signs and Symptoms of IBS in Men

What are the symptoms of IBS in men? IBS is a very broad term and involves a number of digestive diseases. Men with IBS report having diarrhea, constipation, abdominal pain, gas, or bloating. Although men and women can have the same symptoms, in general men tend to experience more diarrhea than women. Men also sometimes experience related issues, such as IBS and prostate issues. And it’s not unusual for men who experience IBS to also have heartburn.

What is often surprising to people is the lack of valuable information that they receive relevant to their IBS after undergoing a colonoscopy. Colonoscopies rule out and treat other things, but they rarely, if ever, shed light on the symptoms or the causes of IBS.

Some people with irritable bowel syndrome IBS have abdominal pain, and some don’t. The same goes for IBS diarrhea, constipation, and even gas and bloating. The gastrointestinal disorders suffered from IBS vary from person to person, but they always have at least one of those symptoms.

Causes of IBS in Men

As many men have experienced, it is not unusual to go to the doctor and to discover that “nothing is really wrong” and that “all of the tests are normal.”  Of the tests that might come back abnormal, the sibo breath test is the most popular test for IBS and is used in an attempt to diagnose small intestine bacterial overgrowth (sibo).  Unfortunately, this test is difficult to perform properly, which often leads to a misdiagnosis. It’s also difficult to treat, and many people who test positive do not respond to treatment, or only respond temporarily to the treatment.

There is a multitude of causes that often go undiagnosed, and none of them are visible on a colonoscopy. Bacterial overgrowths that don’t show up on breath tests, Candida overgrowths that go undiagnosed or are missed, microscopic parasites that doctors fail to test for, food sensitivities and intolerances that most doctors fail to appreciate and can hide for years and even decades, faking you out because your symptoms never seem to correlate with what you eat.

These are just a few of the causes of IBS in men. Enzyme production, HCL production, probiotic levels, and many other things can cause IBS. There is no lack of causes, the challenge is in finding the doctor who can help you find the right one.

Quality IBS treatment in men, the kind of treatment that results in long-term resolution of your symptoms, will vary depending on the cause of your IBS. There are a few medications and stock treatments for IBS, but they rarely work well or for very long and are not worth mentioning here. The same goes for generic IBS diets, such as the fodmap diet.

Highly effective treatment requires IBS detective work (not just ruling out other things) to determine exactly what the cause is. Only then can an effective treatment plan be developed for your IBS. The good news is that IBS is very treatable and you should expect excellent results. If you aren’t getting them, then you haven’t seen the right kind of doctor yet.

There is little discussed overlap between IBS in men and chronic prostatitis. The prostate is in direct contact with the colon, and inflammation in either area can impact the other organ.  Men who suffer from chronic prostatitis often have digestive problems.  Chronic prostatitis can be particularly challenging to treat, especially when it is overlapping with IBS. It is important to treat both to get the best outcome. 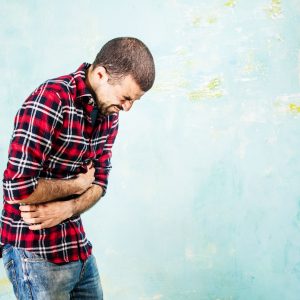 Likewise, IBS and prostate cancer are also related. IBS in men who have prostate cancer often occurs after treatment of their cancer. The treatment, often involving radiation and/or chemotherapy, can impact the digestive system, which in turn can cause IBS symptoms.

Can IBS cause urinary problems in men?  Absolutely. Both of the above issues will cause problems with urination. However, there are more common causes that do not involve the prostate. More common is the fact that the intestinal tract and the bladder are in immediate contact. If you have constipation or bloating, then the expansion and pressure from those are felt on the bladder, causing a need to urinate.

In the case of diarrhea, the spasms or inflammation that can be related to your diarrhea can also impact your bladder, causing you to have frequent urination.

IBS and sex is also an important topic. IBS in men is a major factor impacting intimate relationships and can significantly reduce the desire for physical contact and confidence in the bedroom.  This has largely gone unstudied, but IBS has undoubtedly had a significant impact on an untold number of relationships, sexual or otherwise, for both, its physical and mental impacts on men.

IBS has a major impact on quality of life, changing the way people go about their daily lives and impacting the decisions they make about where they go and what they do.  Over time this adds up to a significant amount of missed opportunities and experiences.  This is no laughing matter, and it should not be taken lightly. You are encouraged to seek medical attention from an IBS expert, not just a gastroenterologist.

How is IBS impacting your life?