How To Safely Manage IBS and Pregnancy

IBS and pregnancy are underappreciated and understudied yet surprisingly common issues. Pregnancy without IBS is challenging enough. Pregnancy with IBS can significantly affect both the mother and the developing fetus and, deserves far more attention than it gets.

Roughly 10% of the population experiences IBS, and that number is thought to be significantly higher in pregnancy. IBS is a very broad term literally meaning irritable bowel syndrome. Many things can irritate the bowel, and the symptoms of IBS can vary widely from person to person.  The symptoms include diarrhea, constipation, abdominal pain, gas, and bloating. These symptoms may come and go, they may alternate, or they may be constant. IBS could also include only one of these symptoms.

There are several questions about IBS and pregnancy that need to be addressed, which we will do. Can IBS affect getting pregnant? Does IBS affect pregnancy? Can pregnancy cause IBS?

Can IBS Affect Getting Pregnant?

This is a particularly interesting and important topic, especially for those of you who are trying to get pregnant. Pregnancy is a unique reflection of our health. The body inherently knows when it is healthy enough to carry a pregnancy. We know that our chances of becoming pregnant are best when our health is optimal. We also know that pregnancy requires more nutrition than usual and more resources for a fetus to develop and be carried to full term.

Many women with IBS have become pregnant and delivered healthy babies. However, IBS is a direct reflection of the health of our digestive tract. If you have IBS, then you are not digesting your food as well as you should. This in turn is affecting the amount of nutrition that we derive from our food. This affects the health of the entire body. This is especially true with diarrhea, which is a rather obvious example of poorly digested food.

With all of this in mind, it is logical to assume that IBS can affect your ability to get pregnant. Although this has not been well studied, it is presumed that resolving IBS would lead to a greater chance of not only getting pregnant but delivering a healthy baby.

Based on the logic above, that IBS is a direct reflection of the poor digestion of food and therefore reduces the nutrients that we get from our food, it would be safe to assume that IBS can affect pregnancy. Fortunately, we don’t have to assume the answer to this question because there is science to back this up.

A rather large study in England on IBS and pregnancy found that there was indeed a connection between IBS and having a healthy pregnancy. Pregnant women who also suffered from IBS were found to be more likely to have a miscarriage. It was also found in the same study that women with IBS had an increased risk of having an ectopic pregnancy (an unsustainable pregnancy that can also put the mother’s life at risk). We suspect that as more studies are done we will learn a great deal more about how IBS can impact pregnancy. Even based on what we already know, there are good reasons to treat your IBS and to take a high-quality prenatal vitamin as part of your prenatal care plan.

Can Pregnancy Cause IBS? 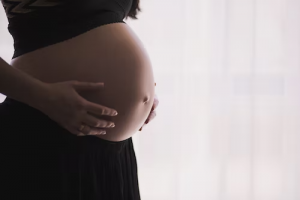 This is a bit of a chicken-and-egg question. If, while pregnant, you get any of the symptoms associated with IBS, do we call it IBS?  There are different opinions on this, but does it really matter?  If you are suffering from a digestive problem while you are pregnant, you want answers and a solution, not a debate. However, there are indications that IBS is more common in pregnancy, according to an article in Gastroenterology Clinics.  We’ll look at the differences between IBS and pregnancy symptoms next.

The Difference Between IBS and Pregnancy Symptoms

How can you tell the difference between IBS and the symptoms of being pregnant?  This may be difficult, especially if you suffered from IBS before becoming pregnant.  If you didn’t suffer from digestive problems prior to becoming pregnant, then your symptoms are likely due to the pregnancy and not IBS. However, that is little comfort to you if you have digestive problems while you’re pregnant. It isn’t unusual during pregnancy for women to experience nausea, often referred to as morning sickness. This would not be considered IBS.

Constipation is another common side effect of the growing fetus taking up space in your abdomen. This puts pressure directly on your intestinal tract, making it more difficult for food to pass and thus slowing down your intestinal transit time. This is constipation. This also would not be considered IBS, but a symptom of pregnancy, unless you were already experiencing constipation prior to your pregnancy.

The good news is that if your symptoms started during pregnancy, then they are likely to go away once the pregnancy is over. That may not be soon enough for your liking, but at least it’s something to look forward to.

Can IBS Get Worse with Pregnancy?

Women with irritable bowel syndrome may find that it gets worse with pregnancy. On the other hand, women with IBS may find that it actually gets better with pregnancy! So which will it be, and why? This is impossible to predict, and we don’t really know why it gets better for some people with IBS. Unfortunately, it seems to be a temporary reprieve and the IBS usually returns once the pregnancy is over.

Ideally, IBS is treated prior to becoming pregnant. However, that is not always possible, so we must understand how to best treat IBS during pregnancy. The best and most successful treatments for IBS involve doing the detective work necessary to diagnose the underlying cause of IBS and then treat that cause. In some women, there is a hormonal component, which can also be evident later in life during menopause.

There are literally hundreds of causes of IBS, far too many to discuss here. What to know about your primary care doctor, your obstetrician, and even your gastroenterologist are great doctors, but are not experts in IBS. They are experts in other areas and in ruling out other things. For the best treatment for IBS, you need to see an IBS expert. There is also testing for IBS that is likely very different than what you may have experienced with your other doctors. You can learn more about IBS testing on our IBS testing page.

Without this kind of specialized focus on IBS, we are left trying to manage IBS symptoms, rather than treating the cause. Fiber is safe in pregnancy, and can be helpful for constipation, but may also be helpful for diarrhea. There are different types of fiber available at your local store. Try more than one kind to find what works best for you. You could react differently to each kind of fiber. You can learn all about different kinds of fiber on our Fiber page.

Dietary changes may also be very helpful in pregnancy and can be done safely as long as you are not restricting overall calories or nutrients. The low-fodmap diet is often used as a general treatment for IBS. Unlikely to cure your IBS, but many find it useful as long as you are careful to include plenty of the foods that are allowed in that diet.

What IBS Medication Can I Take When Pregnant

Medications are generally not recommended during pregnancy, check with your doctor before taking any medication while pregnant. However, Imodium (loperamide) is considered safe during pregnancy and used for diarrhea.

Stool softeners are also usually considered safe while pregnant, and they can be useful for constipation. Be sure to drink lots of fluids, whether you have constipation or diarrhea. Fluids are important in either case. Be sure to keep moving and get some exercise, even if it’s walking or yoga. Both are helpful for your digestion and your overall health.

Managing IBS and pregnancy is challenging, but there is a lot that can be done to help. To learn more about IBS, visit What Is IBS. Are you experiencing any digestive problems while expecting a baby?

« IBS in Women Signs and Symptoms
Can IBS Cause Prostate Problems? »