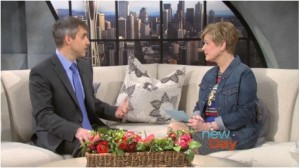 For the second time this month, Dr. Stephen Wangen is scheduled to appear on KING 5’s New Day (March 26th episode) to discuss IBS and the unique approach that the IBS Treatment Center offers patients from around the country and around the world.

In this segment, Dr. Wangen will be joined by author and speaker Beate Chelette.

Beate is a writer and speaker whose personal story with IBS is a great example of the difference patients can expect when coming to the IBS Treatment Center. Her story is inspiring and we are thrilled to be a part of it.

Ms. Chelette will also be doing a reading from her latest book, “Happy Woman Happy World,” on the March 27th in Seattle.

She will read key excerpts from Happy Woman Happy World as well as discuss concepts related to The Women’s Code and it’s principle. Sure to spark a conversation!

Beate Chelette is a nationally known gender decoder, respected career coach, successful entrepreneur, author of Happy Women Happy World, and founder of The Women’s Code. At her lowest point, Beate was $135,000 in debt, a single mother, and forced to leave her home. Only 18 months later, she sold her company to Bill Gates Seattle-based Corbis for millions of dollars.