Irritable Bowel Syndrome (IBS) is an umbrella term used to define a large group of patients who suffer from one of the more common digestive problems.  The range of symptoms that occur in patients diagnosed with IBS is fairly wide.

The biggest misconception about IBS is that it defines a specific medical condition. IBS is, by definition, a group of symptoms affecting the digestive tract that your doctor hasn’t been able to help you solve. Unlike appendicitis, ulcerative colitis, or Crohn’s disease, IBS is more of a starting point than a diagnosis, because it doesn’t provide any new information as to why you have your symptoms.

IBS is sometimes also called spastic colon. It is a very common malady, affecting over 14% of the population, and accounting for up to half of all visits to gastroenterologists. Although most people with IBS remain undiagnosed.

What are symptoms of IBS?

Many different symptoms can be part of IBS, as described in the British Medical Journal, and the severity of symptoms differ from person to person. People suffering from IBS may have only one of these symptoms or all of them. 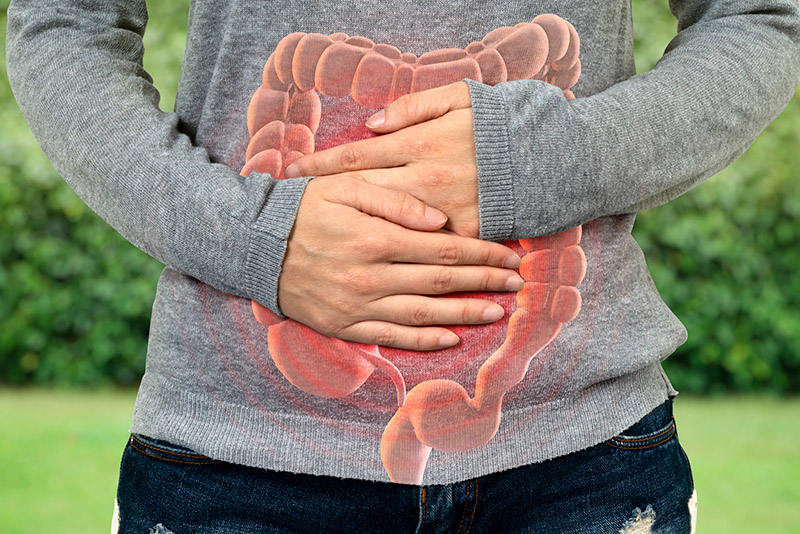 How do you test for IBS?

There is no test specifically for diagnosing IBS. There are many tests that rule out other conditions that can cause the same types of symptoms, and there are many tests for diagnosing the various causes of IBS. But there is no test for IBS. It is a diagnosis of exclusion, meaning that once other issues are ruled out, a diagnosis of IBS can be determined.

Research has shown that IBS does involve inflammation. This inflammation may not be seen during a colonoscopy because it is often only found at the microscopic level. Therefore, people often assume that if their colonoscopy is fine that nothing major is wrong. However, the majority of the immune system is found in the digestive tract, protecting us from outside invaders. Anything deemed a threat by the immune system will trigger an inflammatory reaction. Finding this threat is key to solving IBS.

How does IBS differ from IBD?

These two conditions are similar and are easy to confuse.  IBD stands for Inflammatory Bowel Disease. IBD is made up of Crohn’s Disease and Ulcerative Colitis. The main difference between IBD and IBS is that people who suffer from IBD have ulcers found in the colon or the small intestine, and are more likely to have bloody diarrhea. Many people who have IBD also suffer from IBS at the same time.

What is the difference between Ulcerative Colitis and Crohn’s Disease?

The difference between Ulcerative Colitis and Crohn’s Disease is the location of the ulcerations.

How many people have IBS?

Females are more likely to suffer from IBS than males and it is not associated with socioeconomic status.

The cause of IBS varies from person to person, which is what makes irritable bowel syndrome and its symptoms so difficult for most doctors to treat. Because it is not a diagnosis that defines the cause of the problem, patients must seek out specialized care with an IBS specialist. Through proper IBS testing, it is possible to identify the exact cause or causes of the symptoms and live a life free of digestive problems.

There are several hundred potential causes of IBS, but they can be broken down into three major categories: food allergies and intolerances; intestinal microbiome (good and bad bacteria, parasites, candida, and viruses), and digestive factors (enzymes, HCL). Patients may have more than one cause and generally, suffer from several causes at the same time. This may be the thing that defines IBS, that it is not simply one cause = IBS, but multiple factors that lead to a tipping point.

Does stress cause IBS?

It is a common misconception that stress causes IBS. Stress will exacerbate any health problem, so it’s easy to blame stress as the cause of IBS when you don’t know the real cause of your IBS. Only in rare cases is stress the true underlying cause of IBS. We see patients all the time who have been told by their doctor that stress is their problem, but once the root cause has been identified, the digestive tract heals and the symptoms resolve, not to return during times of high stress.

Does anxiety cause IBS?

Although they are correlated, cause and effect is often misunderstood. What is more interesting is that many patients report that when they previously had IBS symptoms, they also had a heightened sense of anxiety. But that once their IBS was resolved, their anxiety also went away.  This may sound like a coincidence. However, it’s more common for IBS to cause anxiety than it is for anxiety to cause IBS. People who no longer have IBS often have rid themselves of the cause of their anxiety.

How do you treat IBS?

What foods should you avoid with IBS?

You definitely want to see the answer to “How do you treat IBS?” above. Having said that, there are certain foods that many people with IBS don’t digest well. This is not to be confused with a cure for your IBS, but when your digestive system is compromised and irritated, it won’t break down certain foods well. These are mostly raw foods, such as vegetables (including salads), nuts, and even apple peels. Fatty food is also often a problem for people with IBS. These types of foods require more energy to digest. Focus on eating well-cooked foods and foods that are softer.

What are the IBS trigger foods?

Spicy foods, caffeine, and fatty foods are often problematic. There are many, many different foods that can potentially trigger IBS, but they are different in each patient. There is no one food that always triggers IBS across the board. Also read the answer to “What foods should you avoid with IBS?”

How do you cure IBS permanently?

Is IBS a disability?

IBS can certainly be debilitating, and many people have found it difficult, and even impossible, to hold down a job because they suffer with severe IBS. IBS is not always a disability, but it can in some cases be one, as discussed in this research article in Current Gastroenterology Reports.

People sometimes note that another family member also suffers from IBS. There are hereditary causes for IBS, but there are also many other causes for IBS. So it’s not necessarily hereditary, but it can be more common in some families than in others, and the British Medical Journal Gut found that 33% of people with IBS had a family member with the symptoms of IBS. Fortunately, even when it is hereditary, it is still very treatable.

Can IBS cause back pain?

Can IBS cause nausea?

Nausea is another sign that the digestive tract is not happy. It is relatively common in patients with IBS, as discussed in the medical journal Gut. The underlying causes can be the same for both, and nausea usually improves when the IBS improves.

Can IBS cause heartburn?

Heartburn implies reflux, which is another sign that the digestive system is not functioning well. This is often associated with IBS, and the causes of both are often interrelated.

Can IBS cause depression?

Absolutely. Does IBS make you happy or sad? IBS can be very debilitating and therefore can cause people to be depressed. It used to be common to treat IBS with antidepressants (and in some places, it is still common). Unfortunately, this will rarely cure IBS and is not addressing the cause of the IBS. Many studies have documented a link between IBS and depression as well as anxiety, as described in the European Archives of Psychiatry and Clinical Neuroscience.

Can IBS cause a missed period?

Can IBS cause blood in the stool?

Are IBS and diverticulitis related?

People with one may also have the other, but technically are not directly related. However, the symptoms can be very similar, as discussed by Dr. Spiller in the medical journal Digestive Diseases. Diverticulitis is a type of inflammation in the colon. Sometimes doctors misdiagnose a patient with diverticulitis when they may actually have IBS, or they may also have IBS. These two conditions are sometimes difficult to differentiate.  Learn more about IBS and diverticulitis.

Are IBS symptoms worse at night?

Some IBS sufferers find that their symptoms are worse at night or worse when lying down, while others do not. There is no consistent pattern with IBS, but it is not at all unusual for IBS sufferers to have worse symptoms at night. Having IBS at night is usually very disruptive to sleep, which results in fatigue. This is not consistent with IBS and is not a defining feature of IBS.