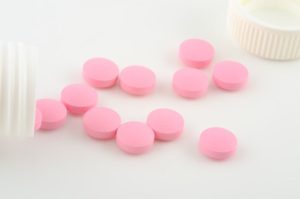 At least 20 million Americans have been diagnosed with irritable bowel syndrome, or IBS, and of course the drug companies are beginning to tap into this large target market by offering medicines aimed at relieving the symptoms of IBS.

These medications are heavily marketed and highly profitable. But whether or not you should take any of them is a separate matter. They alter the physiology and ultimately the action of the digestive tract, but do they address the underlying causes of IBS, or even claim to cure IBS?  And are there any side-effects or warnings that come with these medications?  Let’s investigate.

The typical medical approach for treating IBS involves ruling out other problems and then either doing nothing or trying to suppress symptoms with medications. Many of the patients that come to the IBS Treatment Center have been on numerous medications, none of which has solved their problem. But it’s understandable that people take them because they want relief.

Drugs change how you experience IBS by forcing changes in the biochemistry of your body, sometimes providing temporary relief. Drugs rarely cure IBS. Most medications are designed for temporary use to mitigate the symptoms while the source of the problem is found and addressed. Treatment with these drugs usually does not address the cause of your IBS. Once you stop using the drugs, the symptoms generally return, if you were lucky enough for them to have gone away in the first place.

IBS is caused by a large numbers of issues that can occur withing the digestive tract. (Click here for more information about IBS causes.) Spending the time to identify and treat the cause of the problem can enable the IBS sufferer to cure their IBS rather than just temporarily treat IBS symptoms like diarrhea, constipation, cramping, etc.

However, more concerning is that the use of these drugs often results in serious side effects and/or negative long-term consequences.

IBS SUPPLEMENTS HAVE THEIR PLACE

Supplements (e.g. things like probiotics, enzymes, and botanical medicine), when of high quality and used in the right person treating the right problem, can have wonderfully positive effects. When not of high quality or used improperly, they can do nothing or even make you feel worse.

Fortunately, supplements generally have less of a downside than medications, though some patients may be spending hundreds of dollars a month on supplements and not realizing any significant benefits. Supplements do have their place, and can have great benefits when used properly.

Our goal is to help patients prioritize what supplements are most needed and eliminate those that are not needed. That includes finding the highest quality products available, using them in the proper dosage, and targeting the right products for the right problems in the right patients.

Doctors may use several types of drugs to treat the different symptoms of IBS.

They include the following:

LAXATIVES SHOULD ONLY BE USED SPORADICALLY FOR IBS

Fiber supplements and laxatives are often the first things doctors recommend to treat constipation. Laxatives do not cure constipation, and the longer you use them, the more difficult it is to get by without them. Laxatives should only be used very temporarily and sporadically at the most.

If you need laxatives in order to have a bowel movement, then you have IBS and would be better served to find the cause of the problem and eliminate your need for laxatives as soon as possible.

Some drugs used to treat constipation include:

ANTIDIARRHEAL AGENTS DO NOT GET TO THE ROOT CAUSE OF IBS

Many drugs, both over-the-counter and prescription, treat the symptom of diarrhea, but do not get to the root cause of IBS.

Stomach cramps or abdominal spasms are common symptoms of IBS. They are often in the lower half of the belly, but can be in the the middle or upper abdomen.  Some people get worse after meals and feel better after a bowel movement.

ANTIDEPRESSANTS ARE UNPROVEN FOR CURING IBS

Antidepressants are often prescribed by doctors for IBS. There is a theory that IBS is caused by poor regulation of neurotransmitters in the relationship between the brain and the significant neural network in the gut.

This is an intriguing theory, but it generally doesn’t address the true underlying cause of your IBS, and any poor regulation of neurotransmitters in the gut is not caused by a lack of antidepressant medications. Although some people experience some relief in their IBS while on antidepressants, they do not cure IBS, as noted by Dr. Talley in the American Journal of Gastroenterology.

Brand names of these medications include Celexa, Wellbutrin, Prozac, Paxil, Nortriptyline, and Zoloft, among others. And of course they all also come with many potential side-effects.

Proton Pump Inhibitors, or PPIs, shut down the production of stomach acid. They are not designed for IBS, but we have seen so many patients who have been put on PPIs by other doctors that we must address them here.

PPIs might make your IBS worse, as described in a study by Dr. Compare.  PPIs are also not designed to be used longer than 8 weeks, and they come with a variety of side effects, such as gas, abdominal pain, constipation, heartburn, diarrhea, reduced bone density, increased Clostridium difficile infections, pneumonia, and yeast overgrowth in the digestive tract. Long-term use of the drugs can make it difficult to absorb some nutrients.

Some types of PPIs Include:

ANTIBIOTICS CAN BE THE CAUSE OF IBS

Some doctors prescribe antibiotics to kill bacteria in the gut, which may be the cause of IBS.  This theory has merit for some people with IBS, but broadly using antibiotics, even special antibiotics such as those below, is generally not the best way to treat the IBS.  In fact, it’s often why the problem was created in the first place, as described in the American Journal of Gastroenterology.

ENZYMES HAVE MIXED RESULTS FOR IBS

Enzymes may or may not be helpful for treating IBS. One instance where they can be indicated is for pancreatic insufficiency, as described by Dr. Leeds in the journal Gastroenterology. Many are available over-the-counter, and one is by prescription only (and interesting it isn’t any stronger or any better than many others that don’t require a prescription).

At the IBS Treatment Center we carry non-prescription enzymes that are exactly like Creon, and some even stronger than Creon, as well as many other types of enzymes.

At the IBS Treatment Center, we rarely use any of these medications. Other than antibiotics for bacterial overgrowth, and enzymes for pancreatic insufficiency, the medications listed above have clearly demonstrated their inability to cure IBS. Even worse, almost all these drugs have the potential to make IBS worse.

Our goal is to end IBS symptoms for the long term. To do this, we work to find the true cause of a patient’s problem, not just treat the symptoms. Once we find the underlying cause of the IBS, we can treat it and the symptoms will end, not just be masked by the quick fix of a prescription.

After treatment at our facility, most of our patients are ultimately able to discontinue the use of any previously prescribed medications for their digestion. It is usually a natural transition for a patient to cut back on the meds as they heal and begin to feel better. Without the symptoms, the need to suppress them with medications disappears.