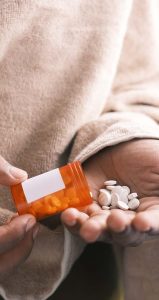 Americans consume an estimated $2 billion per year in over-the-counter painkillers like Tylenol, Advil and Motrin. The most common reason for taking them is for arthritis. However, these drugs are not without side-effects. It also doesn’t take as much as you might think to cause damage. And the variety of side effects includes high blood pressure, stomach ulcers, and other problems.

The risk for those taking NSAIDS (nonsteroidal anti-inflammatory drugs), including ibuprofen products such as Advil and Motrin and naproxen drugs such as Aleve, was similar. Heavy users had a risk of high blood pressure 86% higher than those who didn’t use the drug. Light users carried a 17% higher risk. (Journal Hypertension November 2002 20(11):2301-2307)

Significantly, researchers report that patients with pre-existing kidney disease who took these painkillers at least twice a week for 2 months were two to three times more likely to have the beginning stages of chronic kidney failure, compared with individuals who did not use these painkillers on a regular basis. (The New England Journal of Medicine December 20, 2001;345:1801-1808)

If you think that you should be taking aspirin to thin your blood, think again. A recent study that investigated the effects of taking low-dose aspirin daily for close to four years found that only participants with compromised kidney function benefited significantly. And another study, in the Journal of the American Medical Association (JAMA), showed that fish oils have a blood-thinning effect similar to aspirin. (JAMA. 2001 Jan 17;285(3):304-12)

And it may affect your colon, too. A questionnaire of over 35,615 male health professionals showed that regular and consistent use of NSAIDs such as aspirin, acetaminophen, Advil and other prescription anti-inflammatory drugs was associated with diverticular disease, a serious type of colon damage. (Arch Fam Med. May 1998;7:255-260)

Finally, it is also well known that aspirin and NSAIDS are tied to stomach pain and bleeding ulcers. Yet nearly 30,000 people a year die from using these medications. Many of these deaths are due to bleeding ulcers.

If you have pain, whether it be arthritis or otherwise, there are a variety of healthy and effective alternatives for reducing inflammation and pain that will put you on the road to better health, not temporarily alleviate your symptoms while causing other problems.

« Milk Allergies: Most Reactions to Milk are Mistakenly Considered to be Lactose Intolerance
Food Allergies and Irritable Bowel Syndrome (IBS) »